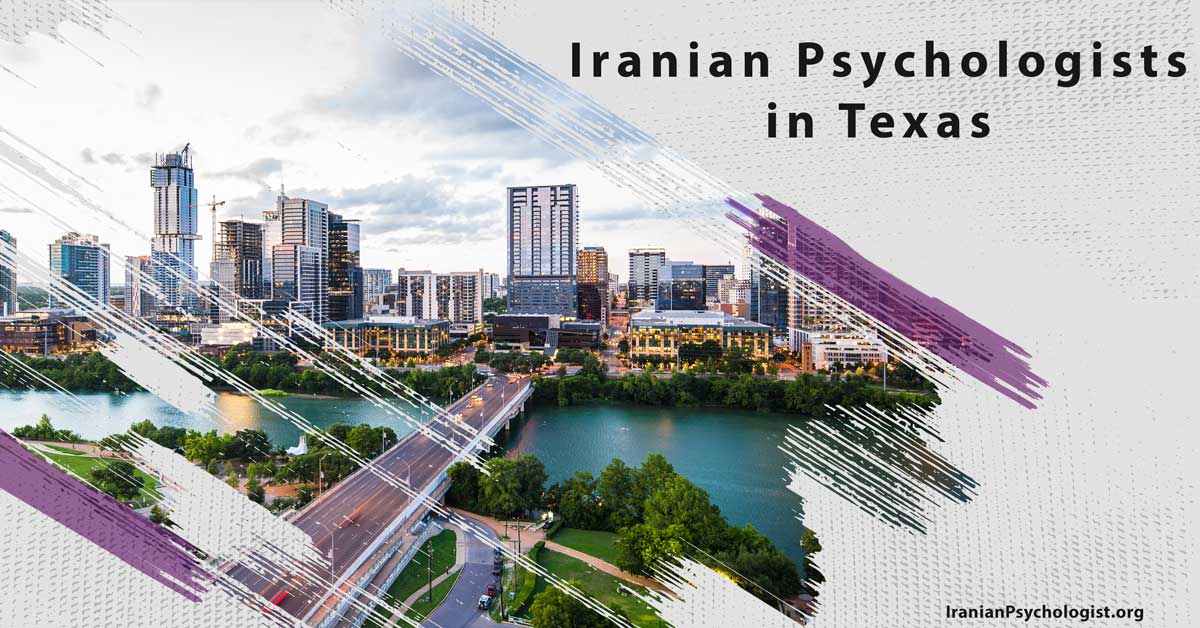 If you are in crisis or suffer from some mental problems beyond your control, you certainly need a professional psychologist to help pass the hard times. If you live in the United States as an outlander, finding the best psychologist could be challenging; therefore, Iranianpsychologist.org has provided a list of the best Iranian psychologists in different states of the US to help those Iranian who live there. Further information about these psychologists working in Texas is given in this article to help you make up your mind in choosing your psychiatrist.

Texas is one of the 50 major states of the United States, located in the South Central Region of this country, and it is the second-largest U.S. state by both area and population. Texas shares borders with the states of Louisiana to the east, Arkansas to the northeast, Oklahoma to the north, New Mexico to the west, and the Mexican states of Chihuahua, Coahuila, Nuevo León, and Tamaulipas to the south and southwest, and has a coastline with the Gulf of Mexico to the southeast. Texas has various types of climates, and the weather conditions vary in different regions of this country.

The United States Census Bureau calculated the population of this Texas around 29,360,759, and this number is divided into different races and ethnicities such as White, Black, Asian, Native, Native Hawaiian, and Other Pacific Islander and the other races. English is the main spoken language of this state, but the other languages are Spanish, Vietnamese, Chinese, German, etc. Taxation, agriculture and mining, energy, technology, and commerce are Texas’s main economic activities, which bring a huge interest.

There are a lot of important cities in the U.S. in this state, and the most populous one in Houston, which is also the fourth largest city of the country and the second-most populous city in Texas, is San Antonio which is known for its tasty restaurant scene, thriving job market and affordable neighborhoods. The third-largest city of Texas is Dallas which is a great home for different ethnicities. The fourth-largest city, Austin, is the best place for finding jobs, so people from everywhere come to this city to make progress in their lives. Fort Worth, known as the most classic Texas city, is the fifth major city of this state.

Iranian psychologists in Texas are trained in their vocation. They can help people with different mental problems like insomnia, anxiety, depression, panic, phobias, couple problems, and children’s mental problems by using the latest methods and techniques of psychology. They are also famous for being methodical, conscientious, obliging, patient, diligent, shrewd, altruistic, and sympathetic. These Iranian psychologists are specialized in different areas of expertise of human behavior, mental health assessment, diagnosis and treatment, and behavior change. They are doing their best to help people to change their bad feelings and develop their health conditions.

What to Look for in a Psychologist in Texas?

Your family and friends or your physician can introduce you to the best psychologists in Texas, or even for more relief, you can call your local psychological association; but if you are a foreigner in Texas, you’d better look for a psychologist who is your countryman and can speak your language. In this sense, you can connect better and explain your problems effectively; furthermore, your psychologist is also completely aware of your culture that helps him or her to solve your problems better.